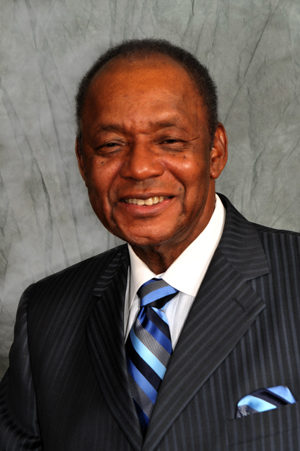 William (Bill) Lucy is a founder and the first and only president of the Coalition of Black Trade Unionists (CBTU), which was formed in 1972. He is one of the most revered and highest-ranking black labor leaders in the world. Under his leadership, CBTU has earned global and grassroots respect as a catalyst for progressive change. He has guided CBTU's rapid expansion in the last decade, from 27 chapters in 1991 to more than 50 chapters today, including a chapter in Ontario, Canada.

In addition to his pioneering role in CBTU, Lucy is the elected International Secretary-Treasurer Ð the second highest ranking officer Ð of the 1.3 million-member American Federation of State, County and Municipal Employees (AFSCME), and he has served in that position continuously since 1972.

Lucy also is an important leader of the AFL-CIO. In October 1995, he was named a member of the AFL-CIO Executive Council, the highest decision-making body in the powerful labor federation. He is also vice president of AFL-CIO's Industrial Union Department, Maritime Trades Department, and Department of Professional Employees.

After nearly three decades of involvement in international affairs, Lucy is recognized as the consummate labor statesman. He was one of the founders of the Free South Africa Movement, which spearheaded the decisive anti-apartheid campaign in the U.S. in the mid-1980s. He later led the AFL-CIO delegation that monitored the first democratic elections ever held in South Africa. In November 1994, he became the first African American elected as president of Public Services International (PSI), the world's largest union federation.

In 1968, Lucy worked closely with Dr. Martin Luther King, Jr. during the historic Memphis sanitation workers strike. In the tumultuous aftermath of Dr. King's assassination, Lucy helped maintain the labor-civil rights-community coalition that sealed the workers' victory and became the model used throughout the nation.

A native of Memphis, Lucy attended the University of California at Berkeley. A civil engineer by trade, he was an assistant materials and research engineer for Contra Costa County, California. In 1965, he became President of AFSCME Local 1675, Contra Costa County Employees. Lucy joined the AFSCME International staff in 1966 and later became executive assistant to AFSCME's late president, Jerry Wurf.

Lucy serves on numerous boards, including the NAACP, TransAfrica, Black Leadership Forum, the Africa America Institute, and the Council of Institutional Investors. He also has received numerous honors. Last year Ebony magazine once again named Lucy as one of "The 100 most Influential Black Americans."